Notion provides bug fixes and speed improvements regularly through auto-updates, so you don’t need to update Notion on Mac once the stable version gets released it automatically gets installed in mac devices.

If you want to know when my notion got updated then you can click on the question symbol “?” The lower-left corner of Notion. 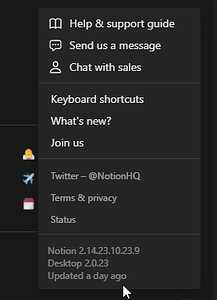 Fix if you haven’t got any updates:

Every new version will include some new features and improvements, and you might notice performance gains as well. If everything is running smoothly on your Current Notion version, you can continue using the same release.

Notion Updates run automatically, so you should only check whether the desktop software is up to date or not.

Related how to guides

Is Notion free on Mac?

Yes, the notion is free on mac but if you want to take it to the next level then you can buy its paid plan for personal or for your company.

I hope we have helped to fix the issue related to your problem and if you are facing any sort of issue let us know we will try to solve it too.